Introduction to Internet of Things: an interview with Marcin Sikorski

Internet of Things is one of the so-called ‘Big Four’ technologies that have dominated the tech landscape, especially in the Industry 4.0 sector. What is it, though, and what is its origin? What are the advancements that we’ll see emerging in the next 2 – 3 years?

In this brand-new interview, I talk to Marcin Sikorski, who works as a Lead QA Automation Software Engineer at Spyrosoft and who’s also the host of the ‘Smart Rzeczy’ podcast – all about the latest directions in this technology and its future.

What is the Internet of Things?

The Internet of Things can be defined in many different ways but the easiest definition to understand is this one: every electronic device that has 4 functions: connect, collect, analyse and transform, is an Internet of Things device. When you have a device (be it a sensor, a lightbulb and a fridge) and you connect it to a network (i.e. wi-fi), this device can collect data from our environment – metrics that we can explore and analyse. The data will be then used in a way that will transform your reality.

One of the examples I can mention is a smoke detector that’s connected to a network and has a dedicated mobile app developed by its producer where you can see what’s happening in your surroundings in real time. The first function is already fulfilled because the device is connected to the Internet. It collects the data about the air quality (second function) and analyses it in real time (third function). If it detects any anomalies (i.e. smoke), it notifies the user (fourth function – reaction) about something going wrong and sets off an alarm or a sprinkler.

If we look at the IoT this way, we’ll understand that the Internet of Things is - fore and foremost - a tool to resolve issues. Every issue – no matter how big or small - that concerns data and a better understanding of our reality, can be solved using the Internet of Things. The starting point always lies in understanding what the real issue is. Choosing the right tools is the next step.

Where does the term come from and what is its history?

The term itself was coined in 1998 by Kevin Ashton. To demonstrate what the Internet of Things is, he presented a toaster that you could send requests to using a computer. It was especially captivating if you consider the fact that we had only ‘computer-to-computer' communication up until that moment and then, we had a completely different device that can understand and interpret the requests.

In 2007 when iPhone was launched, the world changed once again and the technological machinery got rolling with it. The era of ‘the faster and cheaper, the better’ began with companies competing to produce gradually smaller and more effective devices.

Then came the point where we realised that we could make different use of this trend. Assuming that IoT is usually based on simple sensors (small devices with the sole purpose of collecting data) and the data collected by them are relatively straightforward as well, we can quite quickly add an algorithmic layer over the data, which will allow us to interpret and spot certain patterns. By using cloud solutions, we can also make complex calculations outside of the ‘things’. That’s how we achieve a tech perfection.

How has the Internet of Things changed in the last 5 years?

There are two different areas in the IoT sector. We have a traditional IoT – the majority of the devices available on the market or any system you can build yourself. On the other end, there’s Industrial IoT (IIoT) that’s certified and perfectly standardised. It’s also completely secure because there are huge players behind it focusing on high-quality solutions.

Both of these subdivisions grow in parallel and both of them do it rapidly.

What are the most common challenges when introducing IoT?

The first issue is inadequate business awareness – it gets better and better every year, but it’s not ideal. There are certain companies where things are done on the ‘we always did it this way’ basis and where you can hear the question: ‘Why invest in a technology that’s not comprehensible to us?’. Another issue is a lack of long-term thinking about growth and investments. 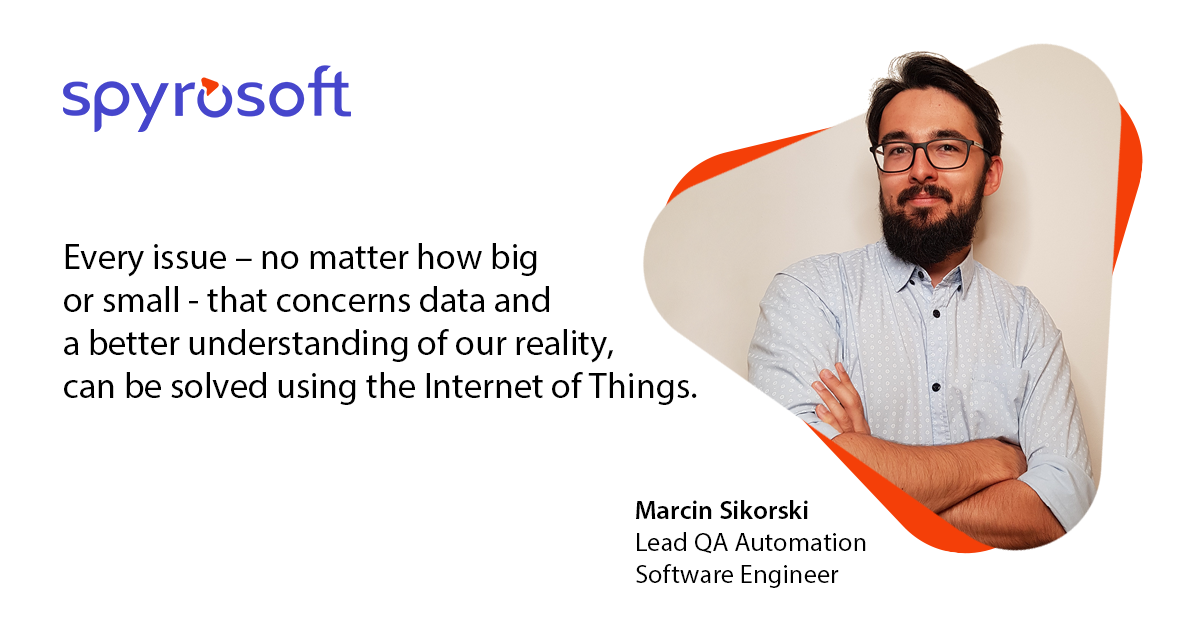 Then there are the people who are simply afraid of this technology. There’s a lot of misinformation about it online and some people started believing that it’s dangerous or even harmful. The truth is that when the Internet of Things first became available, some salespeople kept repeating that this was the moment when everything would change. Just like that, overnight, with a magic touch of smart technology. Firms were buying off-the-shelf solutions without awareness of how and why to use them. So then came the disappointment and the concept that IoT does not work.

The global pandemic has transformed the market setup forever, though. Everyone realised that a considerable number of work tasks can be completed remotely and here’s where IoT re-emerged as the go-to technology.  Multiple companies started to test new devices and technologies, including IoT sensors and blockchain; introduce Predictive Maintenance and many other interesting solutions.

How are the IoT trends that will become more visible in the next 2 – 3 years?

As I’ve mentioned, the Covid-19 pandemic has increased the interest in the Internet of Things, especially when it comes to touchless devices allowing users to interact with them without touching them and to use voice assistants.

To be honest, there’s always the issue of how these huge players will connect IoT with AI and blockchain. Internet of Things is just of the building blocks of this brand-new world. It will complete VR/AR solutions or metaverse developed by i.a. Facebook becoming a middle level between the physical and the digital world.

Duncan Johnson about the CIO100 award, his priorities and goals for the future as the COO of Spyrosoft UK