Backend programmers have been able to store data in JSON format for a long time, since PostgresSQL 9.2. This solution has a number of advantages. Unfortunately, it has also several disadvantages.

Since version 9.4, the binary representation of JSON – JSONB – has been introduced, which saves data a bit slower than JSON, but speeds up its processing and gives the ability to create indexes. It's common knowledge that you can do indexes on a JSONB column, but the topic is quite complicated and you can end up with inefficient queries.

In this article, we’ll focus on JSONB. I’ll present good practices for using this type of column and emphasise its limitations.

I like to visualise what's being said, so let's create a table with JSONB type column with some data:

After executing "select * from holidays" we will get: 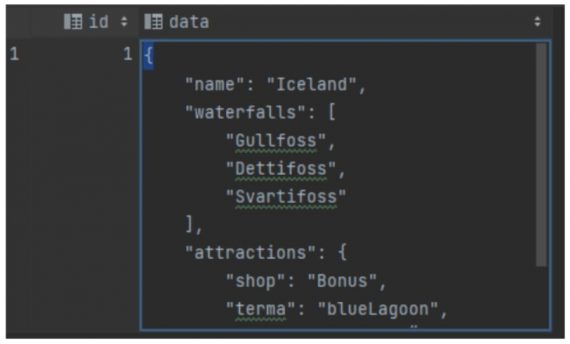 Creating such a model is simple. There’s no need to specify field types. Everything was converted to JSONB without any problems. The ID column was added because the table will map to an entity in JPA that requires an ID.

The application of JSONB

When to use JSONB:

When not to use JSONB:

Optimisation of queries: a closer look at indexing

B-Tree: It only works with the equality (=) operator. It can be done for the entire JSONB column or as a function on a specific field.

Hash: Similarly to a B-tree, it only works with the equality (=) operator. It can also be used on a field in JSONB. With B-tree, queries are faster than hashs, but take up more space and the inserts take longer.

GIN Index with the JSONB_OPS class operator (default) supports existence operators (?,? &,? |) and containment (@>). It only works on KEY. It can be done on a column or a field. You have to watch out for disk space, because it takes a lot of space. It’s less effective than Hash and B-Tree, but more flexible.

In my projects, I use various methods of making queries using Spring Data JPA. In order to try to use the created indexes on the JSONB table, we will focus on 3 options:

JPA doesn't support JSONB operators (- >>? @> Etc). For example, the operator - >> can be replaced with the JSONB_EXTRACT_PATH_TEXT function.

A similar query can be obtained using the specification.

Using specifications for queries is not readable, but it’s great for building dynamic queries. Unfortunately, writing a query using a function will not be efficient. If we create an index: BTREE ((data - >> 'name')), it will be omitted when executing the query using specifications. If we want to speed up the query, we can use the CREATE INDEX function index func_hname_indx ON holidays (jsonb_extract_path_text (data, 'name'));

@Query with a native query

Native queries make it possible to use operators intended for JSONB searches, e.g. data - >> 'waterfalls' and thus, the use of indexes.

In the following section, I will describe a list of queries with performance information.

The examples of creating indexes and queries 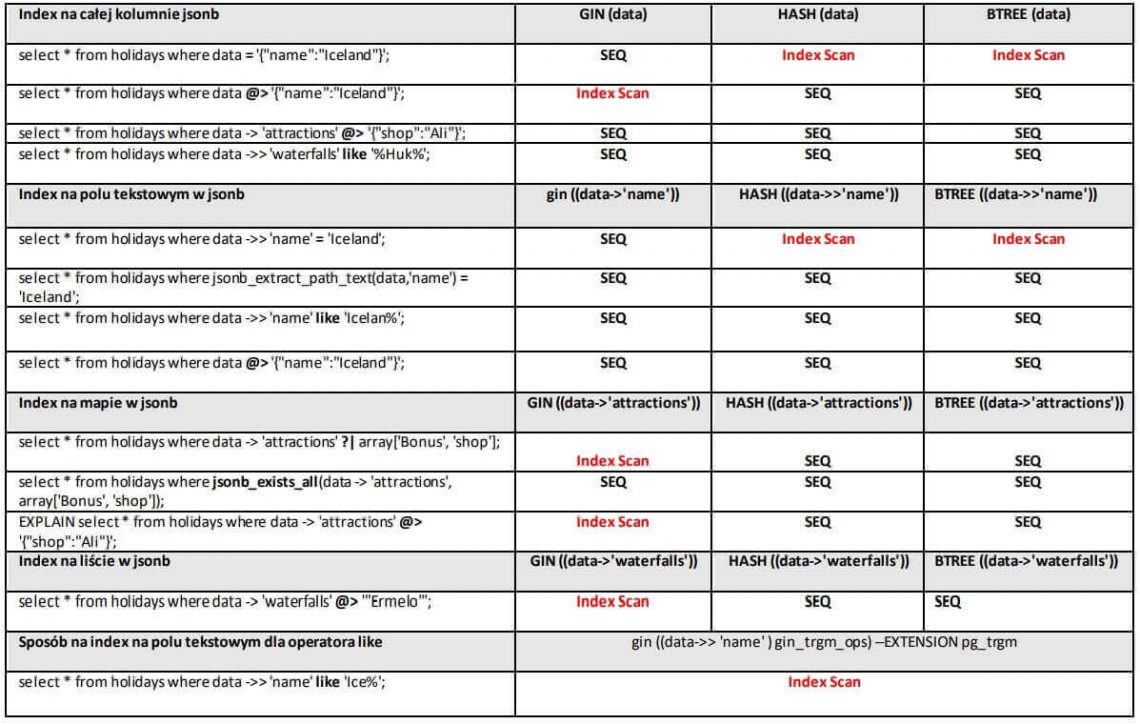 The above list shows the flexibility of the Gin index, which can be used in many situations.

For people who avoid native queries in the code, but need an index, I want to show an example of a function index that can be used and implemented with @Query.

JSONB is very useful in many cases, especially for read-only data and data that do not require advanced queries.

If our project requires the use of JSONB and more complex queries, we can always create an index and implement a native query.

For large databases (more than 1 million records), you need to be extra careful and consider keeping the data in the traditional columns for which the statistics are kept and used for query optimisation.

An inside look at our new office in Argentina

Virtualisation vs cloud computing – same or not?